Recently, my two sons have enjoyed torturing me with euphemisms (the clever way of describing something difficult or inappropriate) for the always-fascinating and mostly-stinky FARTS. Gosh, it’s almost embarrassing to put that into the interwebs. Butt trumpet seems to be running a close first over heinie honk and the ever-popular rump ripper. Yeah, I know. I need to grab an Airwick just to write that stuff down.

The reason I’m even mentioning the dreaded fart is because this is just one of many interesting subjects I’ve been introduced to thanks to life as a writer. I wish I could say that I sit down at the computer and bask in the sunny glow of my many novels. Ha! Instead, I write a wide variety of material, both fiction and nonfiction, about things I never expected to research. Being a writer has opened up my mind (and heart) to the unusual, the tedious, the frustrating, and the laugh-out-loud-wow-am-I-really-doing-this?

A few years ago, I had the amazing good fortune to be hired as a writer by the Museum of Natural History in NY. Barry Joseph, then director of Digital education (and amazing author of Seltzertopia, a book about the history of seltzer), hired me to work on a project about the Haida Gwaii people. He developed an idea for a children’s tale to accompany one of the existing museum exhibits in the Northwest Coast Hall–and I turned it into something for the storytellers to read aloud.

Hey, what are you looking at? I’m outstanding in my field.

Barry and his team also developed an interactive game to accompany other existing museum exhibits. One game was called MicroRangers: An Exhibit-Based Mobile Gaming Program about Microbial Organisms, Biodiversity, and Human Health. For a relatively non-science savvy human like myself, this was quite the learning experience. I wrote scripts that became the center of the game which played around with a big idea: microbes among us and within us form a lively and dynamic world that influences our health and biology.  My favorite of these quests: showing how bison flatulence increases when they eat the wrong grass and their gut bacteria doesn’t work right (more specifically, what’s a bison to do when it has too many methanogens in its rumen?!) And do all those bison (and cow!) farts contribute to global warming? (Note: the science I have presented here has been way oversimplified for the purposes of this blog).

Bovine and bison gas isn’t the only random writing topic I’ve tackled. There was a placemat “book” about different vehicles (backhoe or tow?), a how-to book packaged with a hula hoop (I tried the horizontal isolation down more times that I choose to admit), and a book on playing the recorder.

One favorite thing I wrote for two years was Yoda’s Puzzle Page, a section of a special magazine called Star War’s Kids. This bi-monthly magazine was created and published to tie-in with the release of the fourth Star Wars flick back in the late 90s, long before Rey and Finn came into our lives. For months, I immersed myself in the Star Wars universe (at one point I could describe in detail the difference between Tatooine, Alderaan, and Kashyyyk). Each month I’d invent an acrostic, word search, code, or other variety of puzzle narrated by green Yoda, Jedi master. Love him I did.

That’s the thing readers may not realize: writing is a lot like being an explorer. It’s a constant learning curve to Destination Anywhere. Most of my fellow author pals have penned books about one-hit-wonder teen stars, animals of every shape and size, and just about every other topic you can imagine. Longtime writers tackle whatever subjects land on their desks. And we develop our senses along the way, especially our sense of humor.

We take on new subjects because the more we learn, the more we know, the BETTER all of our writing gets. Even if we are talking about bison farts. (And in case you hadn’t noticed, I’m trying to leave as many hyperlinks as possible in my blog posts because an adventurer rarely turns down the opportunity to click to somewhere surprising…or enlightening. Enjoy!) 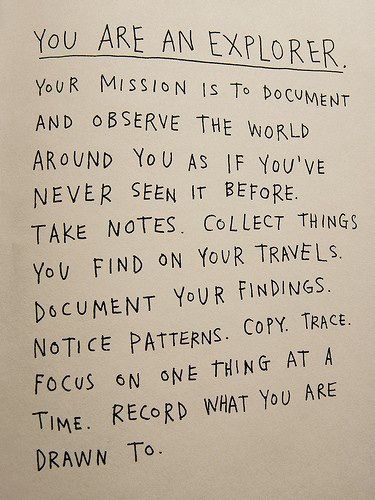 This is a page from a journal/book by one of my favorite writers and creative people ever: KERI SMITH. If you are searching for inspiration, check out one of her interactive books. Click here to see the book on Amazon.